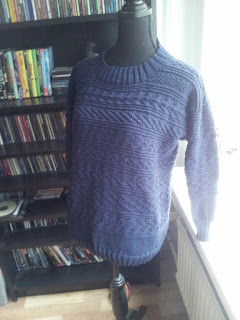 The Vlaardingen Gansey is finished. Today I have woven in ends, and now it is hanging around the model. Vlaardingen II is done and Vlaardingen I (below) is on the needles. Quite a difference, and I am not talking about the needle size only. But what does "wrong music" have to do with the gansey's? A lot, actually. Yesterday I finished knitting the Gansey with a Boney M song; Rivers of Babylon. In the '80s, on a school day the song was played in the bus (as we were on a school trip) One of the teachers ordered the driver to put the music to silence. According to that man, the song had to be boycotted. Strange enough the entire bus was against it, and one remark made silenced the teacher...

"If they can't sing a psalm and make it popular, what function is the radio supposed to have? Now you spoiled our chance to sing along with this psalm." (Rivers of babylon is based on Psalm 137)

He did not expect that, and the radio was put back on... though playing another song.

Back to today. Weaving in ends was the only thing that I saved for today. And guess what: While weaving in ends, two songs, The Messiah will come again, by Gary Moore and De hel Foarby by De Kast explained in short the meaning of the symbols in the Gansey and which ordeals Fishermen in general had to go through while working to earn themselves a living. Just beautiful in its own way! Now I'll leave you... another gansey waiting to be knit! 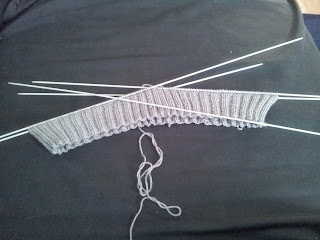