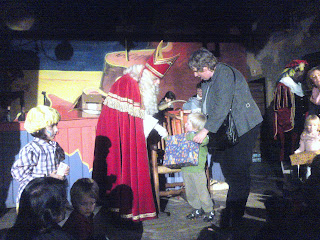 Last Saturday we have visited Condor City in Wateringen, near The Hague. There were the festivities around Sinterklaas - organized by DH's work.


Sinterklaas was late - and had his helpers with him, as there were many presents to share. On the picture you'll see Sinterklaas shaking hands with Wietse, as he just received a huge gift. I had to guide him though on the podium, as Wietse was really tired.

Quite a difference though was the weather that day. Freezing cold - and this weekend as Pakjesavond is celebrated there came a huge pile of snow. 4 inches is to our standards a lot!
Gepost door Bianca op 7:13 p.m.