The past weekend was WWKIP although I have heard that in the US WWKIP day has been moved to next weekend. It was nice enough to knit in the park, although I did not find the energy to do so. Stupid allergies! On Sunday it started to rain - YAY! Not good news for sun lovers, but the rain knocked down the pollen, and that is good for me.

I have been knitting though... socks. One of a pair is done, the other in the works. I also started another pair for Wietse; this time in Panda Superwash StoneWash. The same pattern as the previous ones, only a tiny little bit shorter. LOL!

Oh....I was in a swap with a sweet lady from Austria - we mailed out on the same day, but her package is still on its way to me. So I was a grumpy mom this weekend, telling my kids what I'd do if the postie would show up...:-S

I have been thinking of...
poking him with knitting needles
shout and be angry
throw pollen at him
or hit him with my tape measure

but I'd probably will thank him for delivering the package... 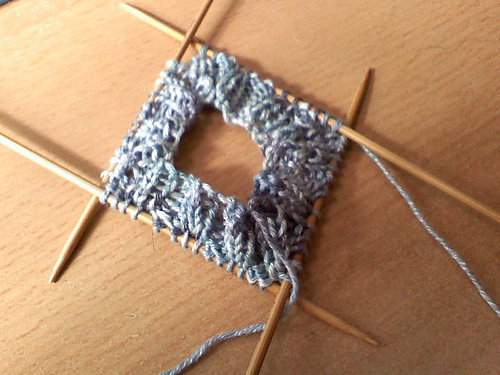