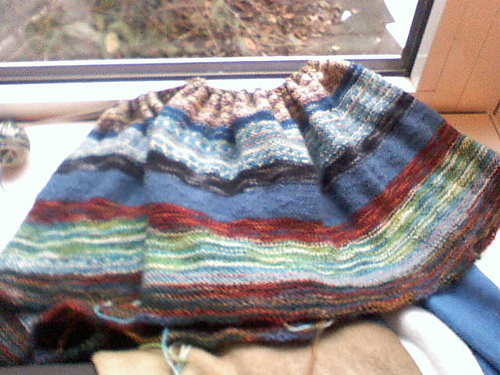 It is slowly growing, my sock yarn blanket. I like it, and even my husband likes the idea. I will be working on it a bit in the coming days, when time permits of course.

Yesterday we spent the afternoon at the hospital with Jouke. His glasses broke, and he can't do without them. But for a perscription under 18, a specialist has to take a look at his eyes, using eye drops. Three hours later the glasses were ordered and paid for - so the only thing Jouke has to do is pick them up after New Year.

But... that is not all... yesterday evening Alexa told me that she had a tooth ache. A visual hole in her left upper molar - and that was going to be a problem. I called the dentist and she could come almost directly to fill the hole.
But her work... that caused a problem. For bakery's it is the most busy day in the entire year...at first she was allowed to go, but later they refused her... in the end the pain won. Johan took her to the dentist and he had to go directly to work afterwards.... speaking of messy days :-)